John is a 9 time Emmy Awards winner who uses his creativity and storytelling skills to help orphan girls in India get an education. Here's how it all happened.

John starts off by telling us about his time as a screenwriter in Hollywood. He explains to us about the behind the scenes of the job, writing scripts that never get filmed and winning 9 Emmy Awards.

He then talks to us about the year his family spent in a small fishing village in Portugal. Shortly afterwards, John and his wife at the time were having marital problems so decided to go travelling with their teenage kids around the world whilst volunteering. This lead them to Costa Rica, Australia, New Zealand and India among other places. They spent 6 months on the road, visited 8 countries... with a budget of $8 per person per day. He actually wrote a book - "Wide-Open World" - about this experience and did a TedX Talk too.

We then talk about the benefits of travel and how in 2014 he ended up spending 6 months in an Indian orphanage. This experience changed his life and he decided he would now commit his time raising money for orphans.

After spending many years with the girls in India, fundraising lots of money and helping as much as possible, John decided in 2019 to start his own organisation called Teach Her which helps girls in India go to college! He also encourages young girls in the USA to fundraise for an Indian girl's education which has been a great success.

It's an incredible story of following your passion, taking risks, travelling the world and helping people along the way. It's interesting to see that all of his work experience script writing, story telling & film production then helped raise thousands of dollars for charities to help girls in need. It's such an inspiring conversation that proves if you want to do things in life, it is up to you to do it. Opportunities are out there, it's a matter of attitude and figuring what you want.

Life is short, life is uncertain. So live it! 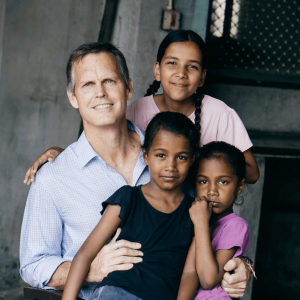